Scandalous: Amanda Knox Is Asking for Donations for Her Wedding, and Just...No

Do you love drama? Us, too. If it seems like there’s a new scandal out there plaguing the stars every other day...that’s because there is. The best part? It’s not happening to us! Get your fix on everything celeb scandal right here every week.

by Brigitte Carreiro
Jul 25, 2019
So, Amanda Knox is getting married. Good for her...right? Well, just wait -- this goes far beyond a typical wedding.

If you're familiar with the Amanda Knox case, feel free to skip ahead. If not, read on with discretion!
If Amanda Knox's name sounds familiar to you, it's because her case was suspicious, sensational (not in the good way) and international. In 2007, then-20-year-old Knox was studying abroad in Perugia, Italy and living in an apartment with Italian hosts and 21-year-old British student Meredith Kercher. On November 2 of that year, Kercher's body was found in a bedroom of the apartment the two women shared. Knox was the one to call the police after coming home from spending the night with her "boyfriend" Raffaele Sollecito (they'd only been dating for a week) and finding the front door open and blood in the bathroom sink.
When Knox was questioned three days later, she confessed to being in the apartment during the murder, of which she implicated her boss at a bar she'd been working at, Patrick Lumumba. She later retracted the confession, claiming it'd been forced, but she and Sollecito were arrested and charged with murder the following July.
The trial was highly publicized for over a year, and they were both found guilty and sentenced to upwards of 20 years in prison. Rudy Guede, a drug dealer, was also charged and has been in prison since 2008 for the murder. 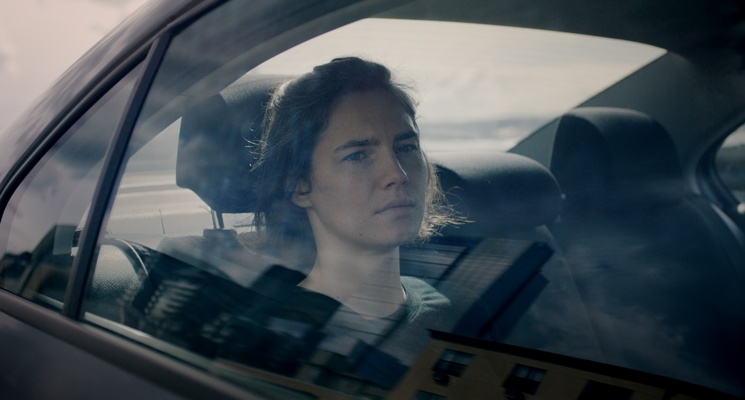 Knox and Sollecito were acquitted and released in 2011 (and again, definitively, in 2015) after any evidence that tied them to the murder was deemed inadmissible and found not to prove their presence at the crime scene at all.

Despite the acquittal, Knox's case was a media frenzy. She was called "a demon," nicknamed "Foxy Knoxy" in an effort to paint her as a sex-crazed maniac and was slammed with sociopathic accusations.

The whole situation left a lot about the crime unanswered, but Knox was, for all intents and purposes, cleared; Netflix released a 2016 documentary about it simply called "Amanda Knox." The story got kicked up again in June of this year when Knox, then 31, returned to Italy for the first time since her conviction was overturned with her fiancé, Christopher Robinson; she was invited as a guest speaker to the Criminal Justice Festival in Modena (organized by the Italian Innocence Project), where she gave a presentation at a panel titled "Trial by Media." Overtly relevant.

Knox, for all her lamenting about being scrutinized by the media (she wrote, "...the media profited for years by sensationalizing an already sensational and utterly unjustified story. It’s on us to stop making and stop consuming such irresponsible media" on Medium), seems to not want the attention to go away.

Why? She's highly publicizing her wedding.

Knox and Robinson -- the two met when Knox reviewed a novel by Robinson for a magazine -- got engaged in November of 2018 with an elaborate, intergalactic-themed proposal. This week, Knox posted an Instagram photo advertising their wedding website and registry...something that typically only gets sent to wedding guests. The only part of the site that is password protected, though, is the RSVP. I'd argue, however, that there was at least some self-awareness involved here.
The space-themed registry is separated into sections and reads, "Instead of a traditional registry, we're accepting donations towards the cost of the wedding. Everyone who donates will receive a signed, limited edition copy of 'The Cardio Tesseract,' our joint book of love poems, forthcoming from Alephactory Press." Anyone who stumbles onto this registry can donate -- clicking through sends you to a PayPal page -- and pre-set dollar amounts are established, going from $25 to $2,000. They're aiming for $10,000.
This woman is asking strangers to donate to her wedding. Crowdfunding. Her. Wedding.
Knox and Robinson are aiming to make the nuptials an elaborate event, complete with costumes, props, special effects, sets, something called an "interactive theater," live performances and topped off with games -- all space or sci-fi themed. It will be out of this world, that's for sure, which -- good for them! But this is oddly reminiscent of that one bride who basically asked her friends to pay for the destination wedding she chose to throw.
After getting some not-so-generous responses, Knox claimed that she was not, in fact, asking for other people to pay for her wedding.
"I did not put it out there expecting to get a dime from anyone," Knox told ABC. "I have a lot of haters in this world, but I have a lot of family friends and supporters as well. I wanted to share with them this fun, creative idea. I suppose I should have anticipated the hateful response and the utterly misrepresented response that the media had."
Yikes.

The woman's been through some sh*t, so I don't want to condemn her -- we should be a little more lenient on how quickly we judge her.
That being said, come on now. A public registry with preset donation amounts, and she's claiming she wasn't asking anyone for money? Sure, she has tons of "fans" out there, but they'd figure out a way to send her money if they really wanted to. Putting it out the way she did was in poor taste. She claims that she doesn't expect much, if anything, to be donated, but then, wouldn't you...not...spend the time and energy creating a website and donation page like this? 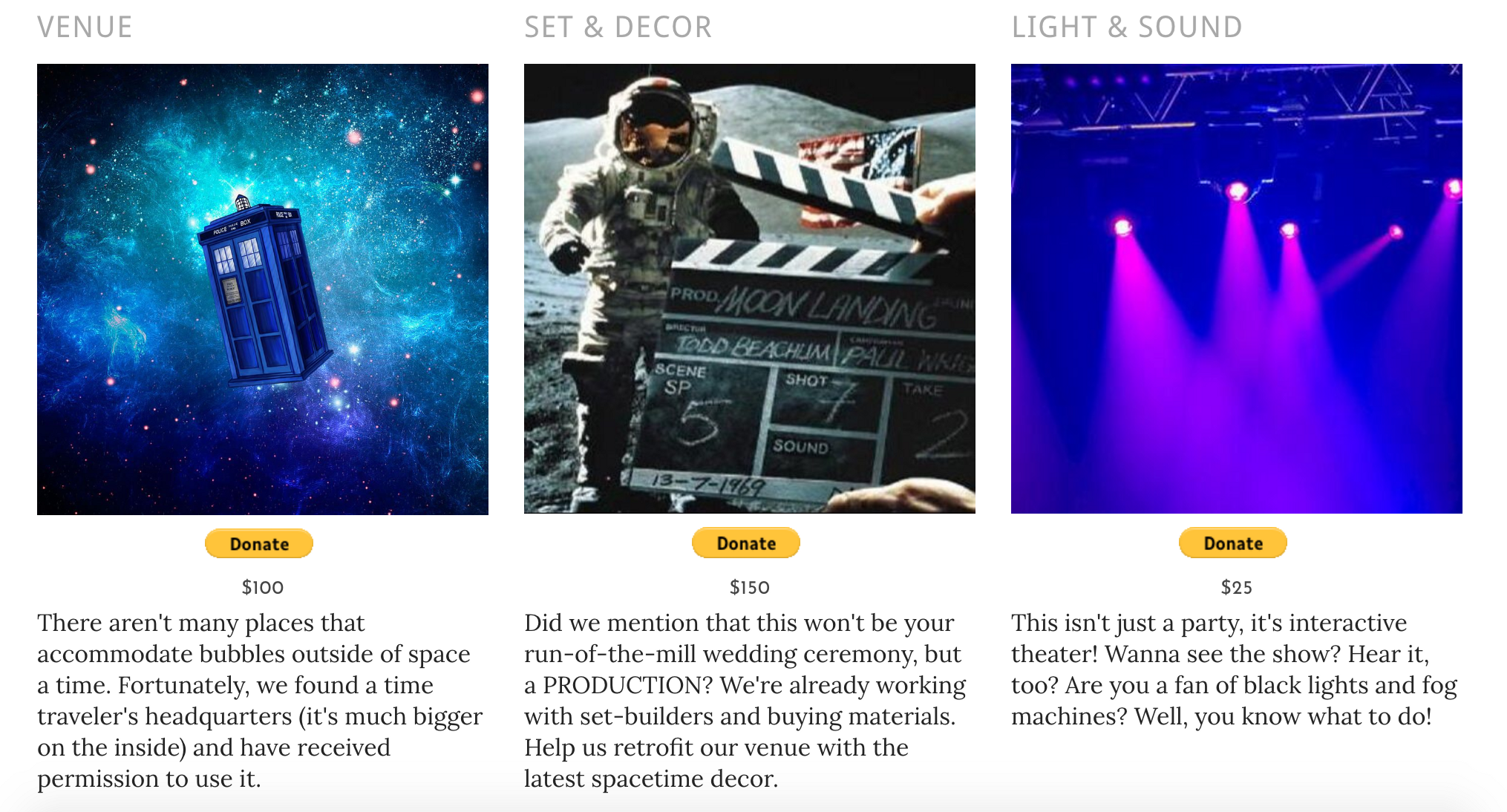 As far as the actual wedding, whatever! Knox will be a bride just like every bride before her, so she should get what she wants on her wedding day. Just don't ask strangers to pay for it.But plenty of people crowdfund! you may be thinking. Sure, but that's for things like podcasts that serve the general public in some way shape of form. That's entertainment; this is personal.
I hope they pull off their theme and all its fixins, but there's something that doesn't sit right about the website.

These reactions are not cute.
Not only are people appalled by the request, but some are even going so far as to point out that Knox should be crowdfunding for Meredith Kercher's family. Annnd this just got heavy.
Basically, this is just dredging up a lot of history that I'm sure Knox has been trying to put behind her, and people are kind of in shock.

What Even Is an Appropriate Wedding Gift These Days?

Bizarre History: These Weird Traditions Used to Be Wedding Etiquette

Couple Upstages Bride and Groom at Their Wedding; Wins Award for Worst Friends Ever