by Kelly Lynch
Mar 24, 2021
Sunday was quite the day for the Queen's oldest granddaugther, Zara Tindall. She just didn't give birth to her third child -- a boy -- with husband, Mike. She delivered him on the couple's bathroom floor at their Gloucestershire, England home.
Lucas Philip Tindall made his arrival at 6:00 p.m. on Sunday, March 21, weighing 8 lbs., 4z. Just like Princess Eugenie's son, Lucas' middle name is a tribute to his great-grandfather, Prince Philip.
Mike, a former rugby player, recalled the exciting ordeal on his podcast, "The Good, The Bad and The Rugby."
Zara's friend, Dolly, was at the house and realized that the baby was coming before they could get to the hospital.
"It was run into the gym, get a mat, get into the bathroom, towels down, brace brace brace!" Mike recalled.
Mike declared his wife a "warrior" during the labor, saying she was up and going for walks with the baby in the days after. Mike took advantage of the home birth in his own special way.
"The best thing about being at home was, as soon as he's wrapped up, you're skin on skin, straight downstairs, TV room, golf on, and I was like, 'this is what me and you are doing.'"
The couple have two other daughters, Mia and Lena. Mia famously held her great-grandmother's purse in a 2016 photo to mark the monarch's 90th birthday.
Zara is Princess Anne's daughter, the second child and only daughter of the Queen and Prince Philip. Anne decided not to give her children titles so that they would be able to enjoy as normal a life as possible. 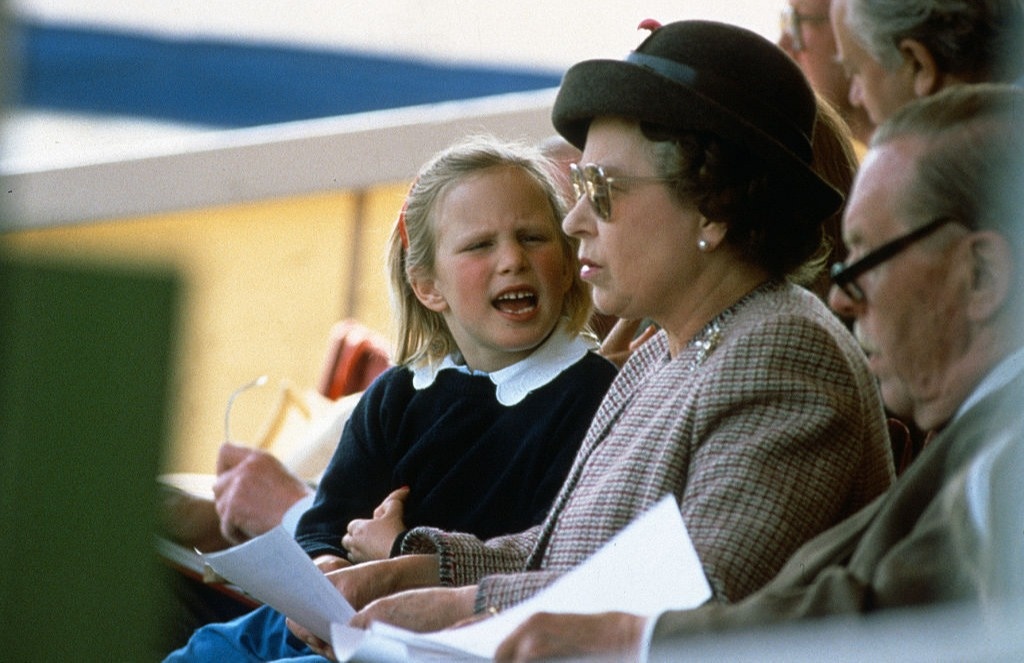 Zara and the Queen enjoy a very close relationship. "She’s at her most relaxed around them [Zara and her husband, Mike Tindall]," Majesty magazine editor-in-chief Ingrid Seward has said, according to the Daily Mirror. "As a child she used to give Zara a smack around the legs when she was naughty, which was frequently. The Queen gets on well [with Prince William and Kate], but [they] don't have the same kind of easy-going giggly time with her as Zara and Mike do.”
Zara is also close to Prince Charles, who reportedly named her. According to HELLO!, Anne once said that Zara made her arrival into the world rather suddenly, so Charles suggested the name "Zara," which means "Bright as dawn" in Muslim.
Zara is a professional equestrian, having won silver at the London 2012 Olympics. Since she is not a working member of the royal family, she's been able to make her own money, securing lucrative sponsorships with a number of luxury brands including Rolex and Land Rover. She and Mike, a former rugby player, married in July 2011 in Edinburgh, Scotland.

Have you or any friends found yourself in Zara's situation?