The Easter Eggs Were the Best Part Of "Mamma Mia! Here We Go Again," but Go See It Anyway

Nostalgia and new fun all in one. Spoilers!

by Brigitte Carreiro
Jul 18, 2018
“Mamma Mia!” makes me feel things. It’s borderline obnoxious how smiley and bouncy I get when I hear “Dancing Queen” or “Honey Honey.” That being said, I was skeptical about this prequel/sequel. I was convinced that without the signature bops and *gasp* Meryl Streep, this film was going to disappoint.
Imagine my excitement when I left the theater saying, “I’m going to be in a good mood for the rest of the week!”
Turns out, Streep wasn’t necessarily the heart of “Mamma Mia!” -- the essence instead came from how the songs and characters made you feel without even being able to put it into words. I do believe, though, that this evocation had something to do with all the Easter eggs strewn throughout this second film.
Between first-movie songs that we love like “Chiquitita” and “Our Last Summer” tinkling in the background of some pivotal moments and bigger numbers like “Waterloo” (young Harry’s big break) and the original performance of “Mamma Mia,” writer-director Ol Parker knew what he was doing when he took this story over. All the songs, still, come from ABBA alums Björn Ulvaeus and Benny Andersson.
Harry was “spontaneous,” Donna found her signature overalls and we even see the pink diary that started it all. 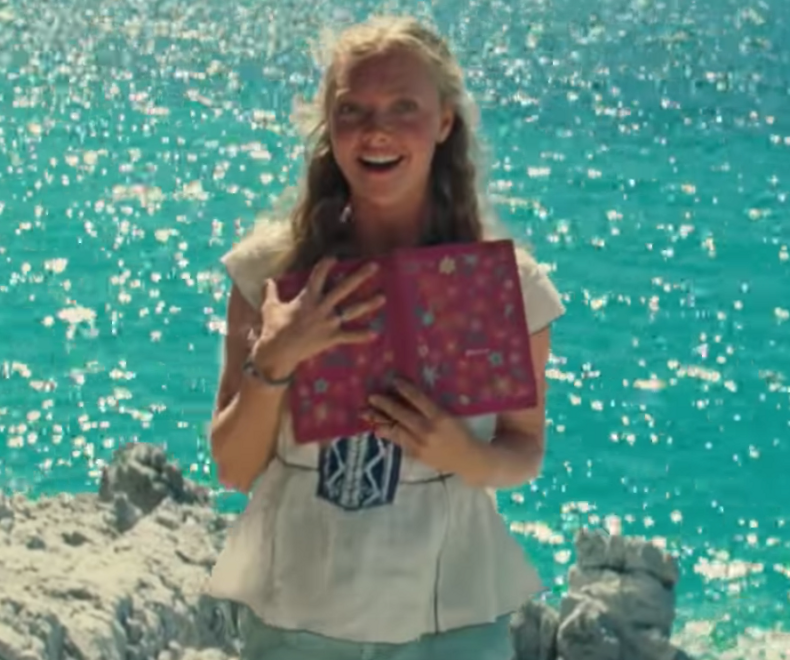 The story follows Sophie (Amanda Seyfried) as she re-opens the hotel on Kalokairi that her mother (Meryl Streep) ran. Don’t let the movie poster fool you -- Donna has, in fact, passed away when we catch up with the cast. But that didn’t stop Streep from making herself stand out in this film -- she had a solo number and danced her way through the end credits.
The film nicely juxtaposes the melancholy present-day scenes as everyone reunites at the new Hotel Bella Donna in the matriarch’s memory with the no-consequence, fun flashback scenes of a 22-year-old Donna (Lily James) traveling across Europe and landing on the tiny Greek island, encountering Sophie’s three dads along the way.
Can I just be the first to say that Sam (Jeremy Irvine) looks like a young, dashing Tom Brady in this film? 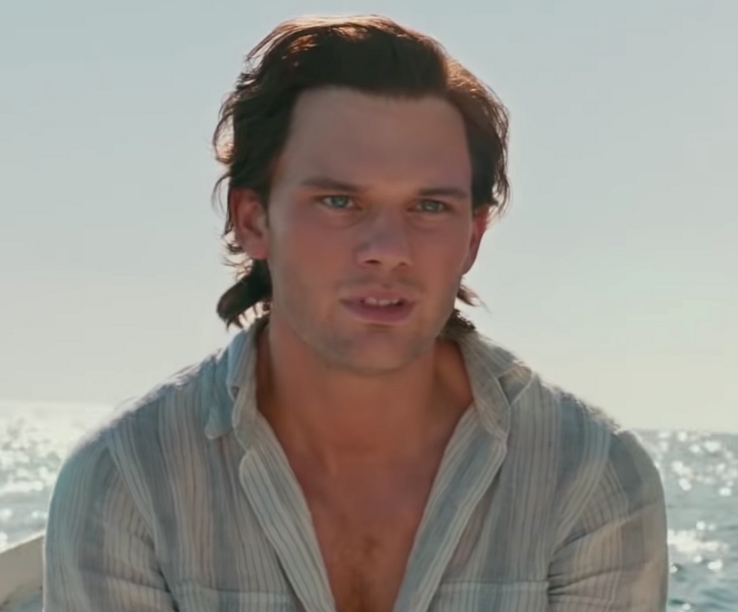 There are only a few points that didn’t land very well here, one of them being -- and I know I’ll get sh*t for this -- Cher’s appearance. Sophie and young Donna make references to the elusive Ruby Sheridan (Cher) throughout the film, and when she finally shows up and sings a few tunes (finding her long-lost love in the manager of the hotel...), it all just feels kind of thrown together for no reason.
But her involvement also gave us this photo, so who am I to complain? 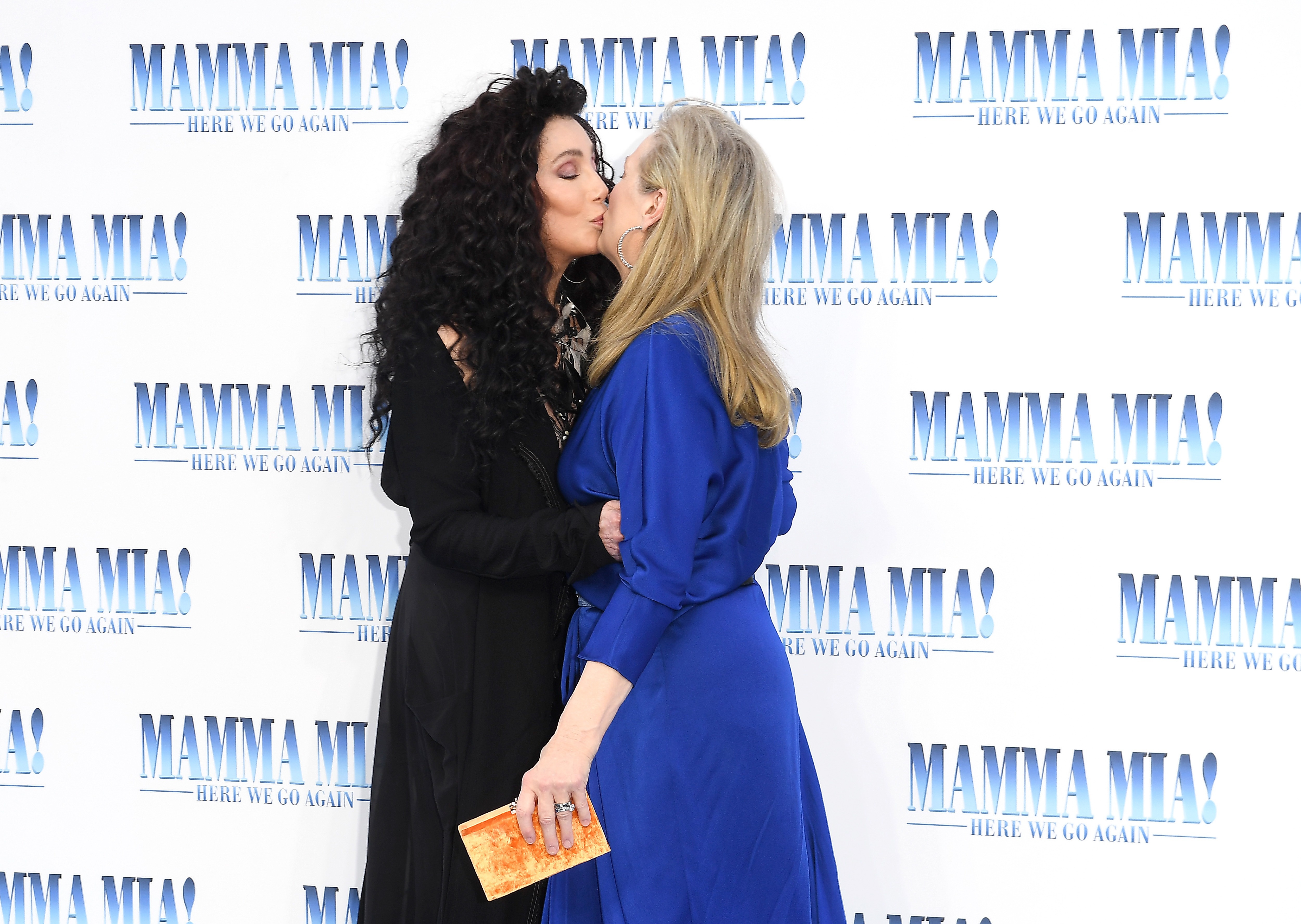 We ship Cheryl.
But also confusing: the timeline of Donna’s boo thangs. When Sophie reads the diary in the first film, we hear that Donna had relations with Sam, Bill (Josh Dylan/Stellan Skarsgård) then Harry (Hugh Skinner/Colin Firth). “Here We Go Again” showed Harry’s loss of virginity (!!!), a platonic interaction with Bill, romps with Sam, a non-platonic night with Bill and then a pregnant belly. So, either the writers didn’t care about the original timeline (unlikely, since they took such care in recreating other details, like Donna’s slide down the stair railing) or we assume that Donna didn’t document her encounters until meeting Sam, and Harry turned up again post-Bill and we just didn’t see it. Which would be a disservice, as Skinner was freakin’ delightful.
Lastly, Bill and Rosie’s storyline. The two are not together anymore at the start of the film due to some indiscretion on Bill’s part. But -- as if you’re surprised -- they’re happy as clams in each other’s arms once we get to the end. For a franchise heavily focused on female empowerment, I’m not exactly thrilled that all it took for Rosie (Julie Walters) to take cheating Bill back was one steamy kiss in an emotion-fueled moment.
Those are my only complaints, because I so much enjoyed other aspects, like young Rosie and Tanya (Alexa Davies and Jessica Keenan Wynn) evoking their older counterparts so well and Amanda Seyfried’s FIRE denim jumpsuit during her stint with the Dynamos.
Takeaway: Go enjoy the movie, because as Rosie said, “Do what makes your soul shine.”

We Saw "Tag" and Thought It Needed Just a Bit More, Ya Know...Tag