A Recorded Version of “Hey Dude” Exists, to the Shame of “Yesterday” Film’s Composer

by Brigitte Carreiro
Jun 28, 2019
Not a blockbuster hit per se, “Yesterday” is a sweet film with a witty script, delightful casting choices and, of course, a timeless soundtrack.
In “Yesterday,” struggling singer-songwriter Jack Malik (Himesh Patel) gets macked by a bus during a global, 12-second blackout. He soon finds that, as a result, he seems to be the only person in the world who remembers (among other, random pop culture elements) The Beatles and their music. Internet searches prove fruitless, and Jake becomes as viral musician using songs like “Let It Be,” “Help!” and “Here Comes the Sun.”
With a score all but completely gleaned from the Fab Four’s discography (there were some originals thrown in there used as Jack’s own songs), you would think making the music for this film would be a walk in the park. But Daniel Pemberton, a Emmy- and Golden Globe-nominated composer who’s also worked on “Spider-Man: Into the Spiderverse,” “Ocean’s Eight” and “Black Mirror,” recorded with Patel for months.
Production scored the composition rights from each of the Beatles or their estates -- Boyle said that their sense of humor made making the movie a breeze -- and while the large performances in the show were performed live, Pemberton still had a whole accompanying soundtrack to create. To do so, the team hit up Abbey Road studios.
“We were recording in the very room where all of these records were made,” he told The Hollywood Reporter. “We used the actual pianos The Beatles used...[and the drums were] mic’d up in the way Ringo would do it.”
Besides Patel, who Boyle cast because “he sang with soul...you cannot manufacture it,” Pemberton also had Ed Sheeran in the studio. Sheeran, who plays himself (though Chris Martin was asked first...) in the film as Jack’s open window into stardom, wrote a new song for the end credits of “Yesterday,” similar to how he wrote “All of the Stars” for the film “The Fault in Our Stars” in 2014. They even filmed some scenes during Sheeran’s Divide tour stop at Wembley Stadium.
While they weren’t reinventing the wheel when it came to an entirely Beatles soundtrack, the team revealed that they did make some changes and adjustments to the lyrics and music compositions to stay within the movie’s narrative. After all, Jack was singing from memory -- there would naturally be mistakes.
In press notes, screenwriter Richard Curtis said he had to stay away from the songs himself.
“I had an odd relationship with the Beatles’ songs whilst I was writing the film," he said. “I was half trying not to listen to them too much because I was half trying to think ‘What would Jack remember?’” 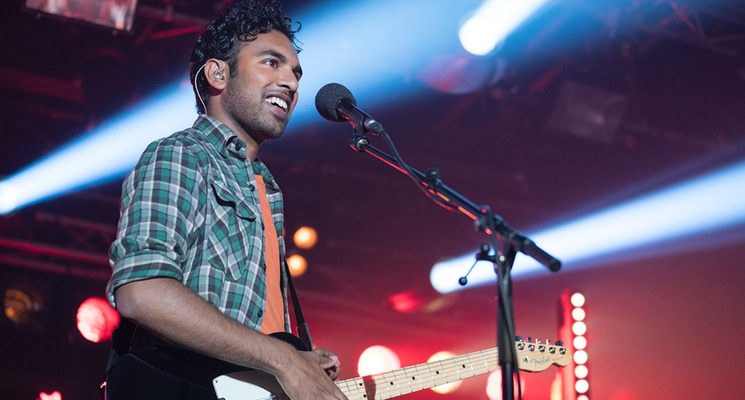 One of those big changes? A...modern version of “Hey Jude.” In the film, Sheeran suggests changing the title and lyrics to “Hey Dude,” and although that version isn’t ever performed during the film, Pemberton admitted that they do have a recording of it.
“I have recorded a version of ‘Hey Dude’ that I’m worried that one day is going to haunt me,” he said. “I was very against recording ‘Hey Dude’; I thought this is sacrilege and I fought for a long time not to do a recording.”
He went on to confess that it was “was quite good fun as well,” though, since he had sent out a message to friends to meet at Abbey Road: “‘Friday night, Abbey Road, come down to the bar, we’ll do something at 9:00, and it will be fun.’ They turned up and had a few beers, and I said, ‘We’re going to Studio One and recording the chorus of “Hey Jude,”’ because I wanted the biggest, most crazy version, and we did ‘Hey Dude’ at the same time.”
What was the word he used? Sacrilegious? Yes, I think that’s an appropriate description of recording “Hey Dude” at Abbey Road Studios, but hey -- all in good fun.

What is your favorite Beatles song?