I Can't Believe I'm Saying This, but the Irish Accents Weren't the Worst Part of "Wild Mountain Thyme"

I’ll just say it: This was a Bad Movie. Remember when I was young, naive and so gung-ho to love it after watching the trailer less than a month ago in spite of the terrible accents and predictable plot? Unfortunately, I had no idea what I was in for. My bone to pick with "Wild Mountain Thyme" isn't even with the accents -- it's with the characters and plot. I went into this film with low expectations and I was still disappointed. So, where do we begin? (Spoilers ahead.)

by Chloe Chow
Dec 8, 2020
It’s the classic girl-next-door issue centered in many a good rom-com. There’s barely any "com" in here, though -- while there are moments of humor, they just feel out of place and don’t really land. So, obviously the boy in question here doesn’t really see our heroine, even though she’s been waiting for him for years and years. The movie makes a huge point of showing how in love she is with him, but it doesn’t make sense to me. They barely even seem like friends! “Wild Mountain Thyme” shows the two constantly bickering and complaining about the weather more than anything. Ultimately, the biggest issue for me is that our Dashing Love Interest doesn't seem to care about our Stubborn Heroine until they get together.

Forget about “Fifty Shades of Grey” -- Dornan’s Anthony Reilly couldn’t be further from Mr. Grey here. No qualms with that. But the issue is that the character of Anthony isn't that likeable. He's an oblivious dreamer at best -- in his own world and constantly moody. Dornan is clearly committed to his performance, but there just wasn’t enough substance for me. And the father-son relationship between Christopher Walken’s character Tony and Anthony could’ve been touching, but instead it felt contrived and two-dimensional. Why are they constantly butting heads? Does Tony just not like his son? Does it have anything to do with his wife's death? It makes Tony's ultimate death bed conversation that much more confusing and forced when father and son come together to make amends before the former's passing.
Meanwhile, Rosemary (Emily Blunt) is made out to be the strong-willed, snarky heroine type, but that’s why her feelings for Anthony aren't as believable. I actually was rooting for her to move on, TBH. He tells her more than once to leave Ireland, but only because the land isn’t meant for decent people (a solid complinsult if I’ve ever heard one). But the fact remains that Anthony treats her like an acquaintance. Zero chemistry here! Listen, if he won’t make a move, GIRL, LET HIM GO. 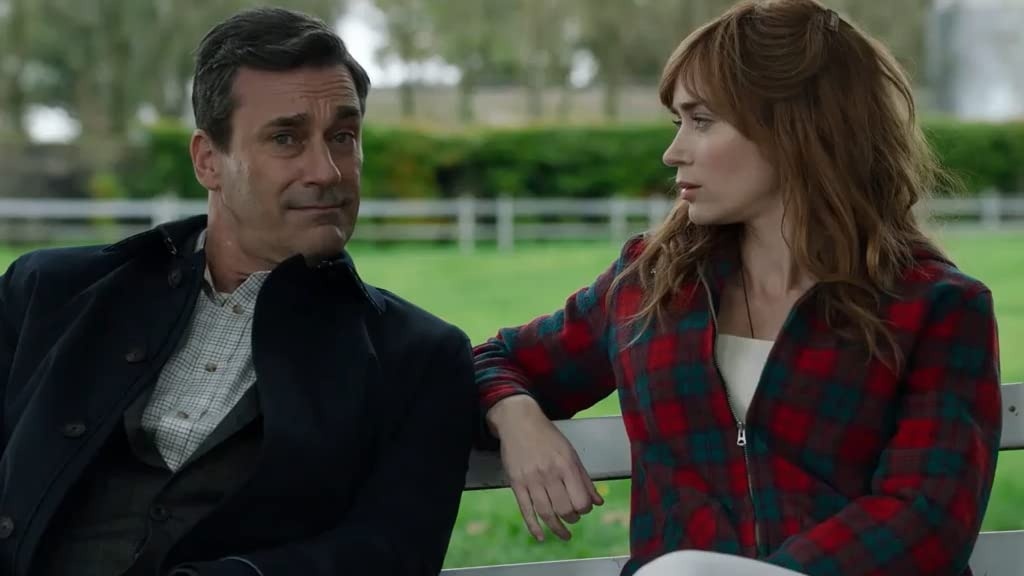 The crux of the plot is that Tony won’t leave the family farm to Anthony because of their tumultuous relationship. Tony doesn’t think that he can take care of it and that Anthony needs to be married to own it. But then he wants to sell it to his single American nephew (Jon Hamm) who’s never stepped foot on a farm a day in his life? Riiiiight. So, wanting the farm, Anthony tries to bring himself to propose to Rosemary, but at that point it's only because he wants the farm and to satisfy that nonsensical condition from his father. He takes it as a sign when he loses his mother's ring on his way to propose. (At least until the end, when his "real" feelings are revealed, Rosemary divulges that she found the ring, and then they're actually married.)
I'd also like to point out that “Wild Mountain Thyme” subtly reinforces Irish and American stereotypes throughout the film. This comes into play especially when Anthony’s cousin Adam visits. When he isn't discussing his fantasy of buying a farm, Adam's dialogue (and quite a few lines from other characters in the film) differentiates Americans and the Irish -- especially how passionate and argumentative the latter are. Adam is everything Anthony is not -- flashy and decisive. He makes it a point to say "You people" and immediately starts trying to flirt with Rosemary at Tony’s birthday party, who goes from intrigued to confrontational. But then later in the film, she spontaneously decides to visit Adam for ONE DAY in New York City where he kisses her (and we have no indication if Rosemary's really into him or not! She just goes: "Oh my god!") and then she just goes back to Ireland?! Okay?!

Rosemary and Anthony's interactions throughout "Wild Mountain Thyme" leave much to be desired, and everything comes to a head during a tense visit at Rosemary’s house. Their tension reads less romantic and more like...actual tension. Rosemary tries to force a confession out of Anthony as to why he never returned her affections, and she lowkey holds him there with beer and a sandwich (a winning tactic if I've ever seen one). Not only does she threaten him when he tries to repeatedly leave, Rosemary also casually expresses suicidal thoughts because she’s lonely and (it's hinted) emotionally paralyzed by her love for Anthony. Anthony just brushes off these comments as anxiety (uh, problematic much?). This role was honestly a huge disservice to Emily Blunt, who deserves more than to throw herself at a man (albeit through a character, and at Jamie Dornan).
There's also a secret that Anthony has been harboring that's hinted at only once until the climax of the film. We’re just supposed to expect that Anthony’s been in denial about his feelings for Rosemary this whole time because he doesn’t think he deserves to be with her. And that's because...drum roll, please, he believes he’s a honey bee (?!). Yup, you read that right. There was no clear indication as to why Anthony holds this conviction (the only tie-ins I can think of are a beginning scene when young Anthony sniffs a flower and another where his father is watching a doc on bees) and we, the audience, never truly understand why Anthony feels this way.
Anyway, it doesn’t matter to Rosemary that Anthony thinks he’s a bee! None of that matters! What matters is that he’s afraid of love, and she’s ready to accept him no matter what. And just like that they’re in love and married by the end of the film. As for Adam, he ends up with his seat mate from the flight over.
This film was a little ridiculous. To be sure, there were plenty of "so bad it's good" moments. But “Wild Mountain Thyme” as a whole just didn’t feel coherent -- from unnecessary dialogue (and lines like “Men need height to balance the light and goodness of women” and “Have you ever thought about my shape?”) to weird transitions (Rosemary’s mother abruptly dies with only two nods to her failing health, and then Tony is suddenly on his deathbed as well a few minutes later). At the end of the film, I was left wondering what the heck I'd seen, but I was just glad it was over. That's an hour and a half of my life I'll never get back.

Not a member of Dailybreak yet? By registering, you gain access to lots of perks, like the opportunity to earn points by simply reading what’s new this month on Netflix or learning a new recipe from your favorite brand. Once you register, you can use your points to enter to win prizes ranging from a $25 Amazon gift card to a Fire HD 8 Tablet. So what are you waiting for? Sign up and don’t forget to like us on Facebook.

What was the last movie you watched?