What's On Wednesdays: "From Dusk Till Dawn"

by Theo Brown
Nov 6, 2018
This week's pick: "From Dusk Till Dawn," AKA Quentin Tarantino's first paid writing assignment (for a lump sum of $1,500) and George Clooney's first Hollywood film role. Repeat: George Clooney's first Hollywood film role. Now if that's not one of the crazier things you've read today well...we guess there are a lot of crazy things going on in the world right now, so fair enough -- but in all fairness, this movie is, in and of itself, pretty freaking crazy.

For the squeamish and the easily offended:

This movie earned its "R" rating.
It's violent, sexual and quite crass and if that isn't your thing, that's fine! We just wanted to give you a friendly little heads up before you take a deep dive into the dark minds of Quentin Tarantino and director Robert Rodriguez.

What's it about, you ask?

Before we give you the whole enchilada, hear this: "From Dusk Till Dawn" is a wild ride when you go in completely blind, so if you happen to be in that subset of the population and your interest is already piqued, we recommend you stop reading now. Go watch the movie. Don't look up anything about it, don't read the logline Netflix lists under the title. Just. Watch it. And prepare to be blown away...
If you need a little more convincing or if you're simply curious to learn more about the hype train we've set in motion, carry on.
The story begins with brothers Seth (Clooney) and Richie (Tarantino) Grecko, two troubled souls fresh off a jailbreak/bank robbery combo hightailing it for the Mexican-American border with nothing but death and destruction in their wake. What they don't know is that the only thing waiting for them in Mexico...is more death and destruction.
And an absolute sh*t ton of vampires.
But we'll get back to that later.
The Grecko brothers hijack a caravan from a former priest and his two teenage kids in order to safely sneak across the border. It's awkward and let's just say Richie is, for lack of a better phrase, an utter and total creep with the kids. Not cool, Richie. Not cool.
The unlikely party gets through to Mexico where Seth has organized a meetup with the local cartel who demands a cut of the money the brothers stole to ensure the rest of their loot is safe and spendable. The rendezvous spot? A cute little truck stop called the Titty Twister. The twist? The cartel doesn't show up. 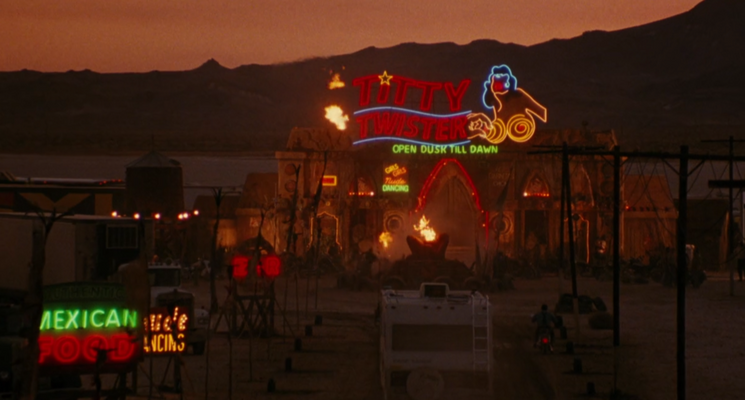 Cue Cheech Marin of Cheech and Chong, Danny Trejo of, well, Danny Trejo and Salma Hayek, who need not associate with anyone, save Mt. Olympus residents and real-life princesses. The actors are, respectively, a bouncer, a bartender and a dancer, and unfortunately, they're all also blood-sucking super-vampires.
Told ya we'd get back to it.
One thing leads to another and, just because it's fun to type out in one really long sentence that you can read back to yourself and hear in the voice of some long-winded nerd, the truck stop turns out to be a safe haven den for a whole bunch of undead killers well versed in luring drunk truckers and other drifters into their trap so Seth and Richie take it upon themselves to fight the supernatural freaks off with every device, weapon and wooden stake they can find in order to keep the priest and his precious cargo safe.
We won't spoil the end, but let's just say it doesn't...suck.

At its core, "From Dusk Till Dawn" is different. It's two movies in one. It's dumb as hell yet somehow, incredibly captivating. It's probably unlike anything you've ever seen before and it's new to Netflix, so watching it is basically like going to the movies, right? Right.
Here's Tarantino in '96 on "The Tonight Show" with Jay Leno, actually talking about what makes FDTD different.
And here's George Clooney in an interview with STUDIOCANAL Home Entertainment on the importance of FDTD in his career. Please watch it because it honestly took like, four hours to find the damn thing.

Also, remember what vampire movies were like before "Twilight," "True Blood" and "Abraham Lincoln: Vampire Slayer"? Yeah, us either. Another reason why watching FDTD is worth it -- it kind of cleanses your cinematic palette of all the vampire bullsh*t from the past decade.

Did we uh...Did we mention George Clooney?

If you're still on the fence...

...Watch the original "From Dusk Till Dawn" trailer below. Maybe it'll give ya the extra push you need to go ahead and watch the thing. Or maybe it'll turn you off completely. Let us know in the comment section below!

Will you watch "From Dusk Till Dawn" on Netflix tonight?