Dynamic director-duo Ethan and Joel Coen return to the silver screen with a fresh tribute to American Western cinema in "The Ballad of Buster Scruggs." It's definitely...different but then again, these are the Coen brothers we're talking about here. They're responsible for films like "O Brother, Where Art Thou?" (2000), "The Big Lebowski" (1998) and "Fargo" (1996). In short, it's the kind of different you want to see, and if you like westerns at all, you'll love "The Ballad of Buster Scruggs."

by Theo Brown
Oct 30, 2018
That fella right there ^^^ that's Buster and believe or not, but his "ballad" only lasts about 30 minutes. Originally, the film was slated to be a Netflix limited series comprised of six episodes, but the Coen boys decided they'd rather do something a little off the beaten cow-path and cram 'em into one feature film.
The result is a series of hilariously brutal vignettes orbiting around one central motif: death, in the form of a bullet between the eyes.
The Coen bros don't shy away from stereotypical western tropes, either. From loud cowboy boot spurs to red face-painted Native Americans, they embrace the corniness of the Westerns of yore in an almost mocking manner that lends itself well to each incredibly odd character.
Anyways -- let's get down to business. After all, there are five more stories to get to! We won't spoil Buster's but be warned: There are spoilers ahead, so if you're not the spoilin' type, ya best turn that mouse around and bookmark this page 'til after you see the film. 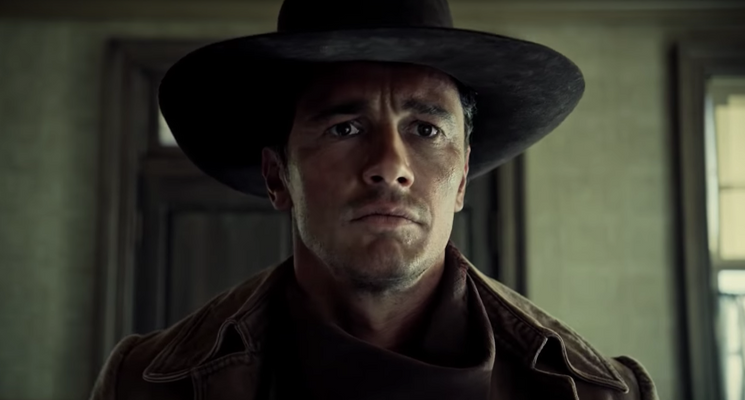 Ahh, the incredible James Franco. Acclaimed scholar, celebrated actor and beloved goofball. Cast as an outlaw who falls from one misfortune to the next, Franco's performance is what you'd expect: sort of aloof and a little cheeky. After he escapes one hanging, he's apprehended again! And as he stands in the gallows for a second time, one of his fellow do-badders bursts into tears.

Promptly after, the lever is pulled, Franco dies and the screen fades to black. Second chapter: over.

The Thespian and the Showman 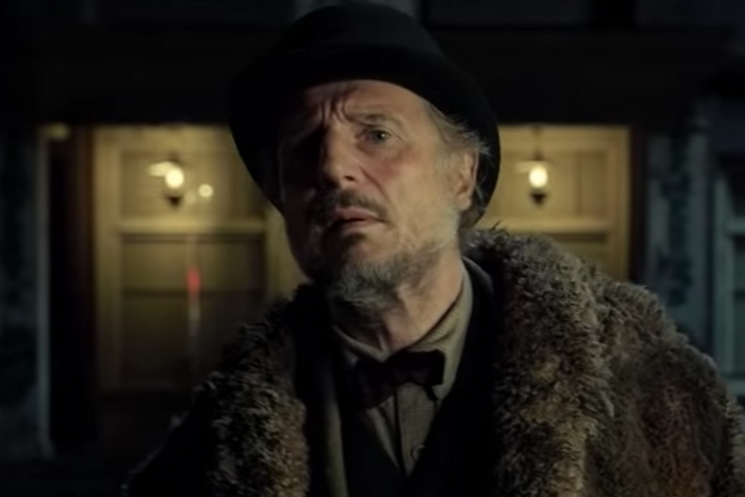 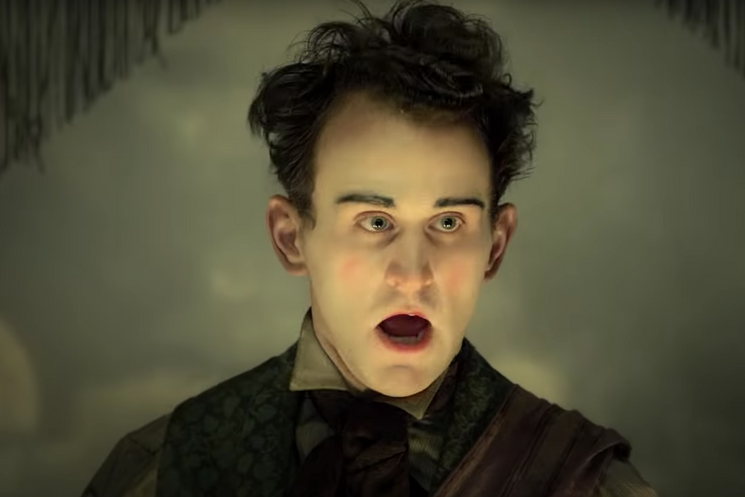 Harry Melling, better known for his role as "Dudley" in the "Harry Potter" films, gives a great performance as a limbless thespian beside Liam Neeson, his caretaker and travelling showman. Unfortunately, Neeson doesn't have "a very particular set of skills" in TBOBS, but he does have the gall to trade his thespian out for a chicken when local crowds find the chicken's act more appealing than the thespian's.
The showman's solution? Throw the thespian off a bridge into a river. Absolutely BRUTAL but hey,
that's the Coen brothers for ya!
Sorry, got a little carried away there...back to the review!

Tom-mother-freaking-WAITS -- arguably one of the most important and iconic musicians of the last half-century -- takes on the role of a lone prospector, traversing big sky country in all of its glory on a quest for one thing and one thing only: gold.
Maybe it's because he's old, maybe it's because he's great, maybe it's because he mined for valuable materials in a past life but whatever the reason may be, Waits does a fantastic job portraying an old, charismatic prospector gone mad, his whole life spent searching for riches.
He regularly converses with the "pocket" of gold he's digging for and when he eventually finds it...he gets shot in the back.
Now, I really want to tell you what happens next, but I'm leaving it out. Just watch, it's worth it I promise you. 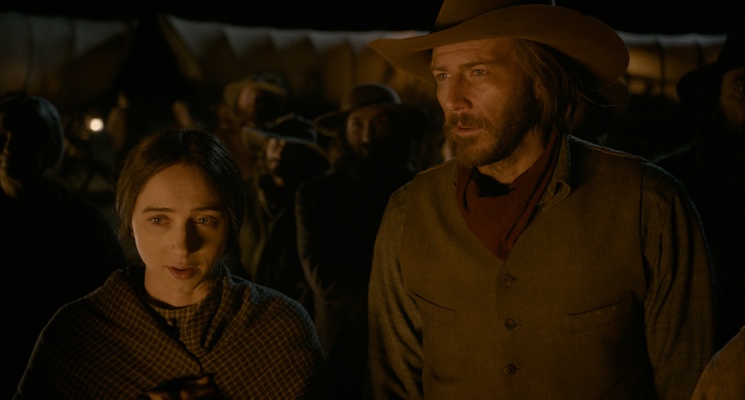 Undoubtedly my favorite of the six stories. Officially entitled "The Gal Who Got Rattled," this segment is hopeful, exciting and in the end, completely drenched in crippling depression.
It follows Alice Longabaugh (Zoe Kazan) on a cross-country trip to Oregon, where her sick brother has found her a potential suitor (who also happens to be his future business partner). But, as one would expect at this point, big brother's health takes a sharp turn for the worst annnnnd...he dies.
Alice is left alone with no money to pay the farmhand manning her wagon, no family to return to -- nowhere to call home, just her brother's mangy mutt, which he affectionately named President Roosevelt.
Enter: Billy Knapp (Bill Heck), a handsome cowboy hired to guide the caravan safely through the west. He offers to take Alice's hand in marriage, cover her dues and essentially save her life -- and she accepts! That is, until she follows President Roosevelt into the prairie and is attacked by savages... 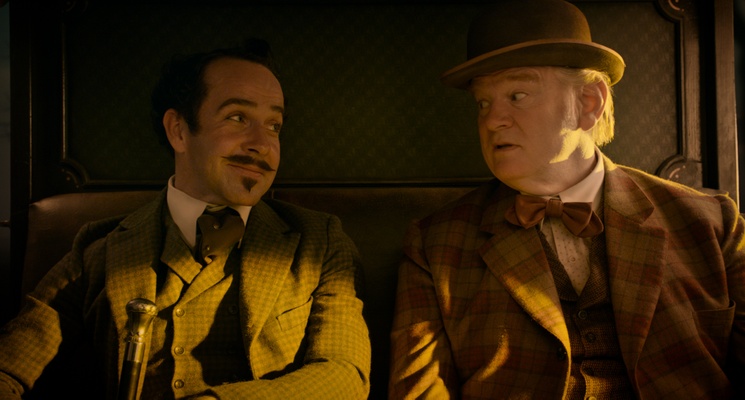 Three horses, two henchmen, one driver and one hell of a conversation -- the final story in this cinematic exploration into a modernization of the wild west is...pretty unsatisfying.
Throughout the entire episode, we're confined to the inside of a rumbling stagecoach, listening to a collection of five interesting individuals talk about love, life and what it means to be human.
If I was to take the "everything the Coen brothers do is perfect and they simply don't make mistakes" route -- I'd say that the ambiguous ending, the lack of action and overwhelming amount of dialogue really is more purposeful than it comes off to be.
Maybe it's a comment on the afterlife, the fact that we're all headed there eventually, or maybe it's more of a jab at the current format and state of streaming television series.
Either way, the lack of climax left me wanting more...but maybe, at the end of the day, that's a more powerful and compelling ending that a nice, neat little bow? No one can say for certain, but you'll just have to watch it for yourself to figure it out for sure.
"The Ballad of Buster Scruggs" hits Netflix on November 16. You can make your own decisions then.

Will you watch "The Ballad of Buster Scruggs"?!