by Brigitte Carreiro
Jan 5, 2021
Last night, Matt James began his journey as season 25's Bachelor. He and a gaggle of women looking for love arrived at the Nemacolin Woodlands Resort in Pennsylvania, went through the necessary testing and quarantine procedures (which we were thankfully spared from watching this go-around) and prepared to put their most vulnerable selves on national television.
I imagine appearing as one of 32 women competing for the attention of one single man isn't the most comfortable situation to be put in, so, no matter what, you have to applaud these women for putting themselves out here. Trying to find ways to stand out in the crowd has to be a huge challenge -- and don't even get me started on figuring out what to wear.
One woman, Kaili (pronounced Kylie, which made me pull some hairs out of my own head), decided not to decide at all, appearing at the resort in just her undergarments and a thin, silk robe with two options for James to "help" her pick. Like I said, we must admire the gusto.
But even cringier, unfortunately, was what happened to Anna Redman, a 24-year-old copywriter from Minnesota, and Alana Milne, a 26-year-old photographer from Toronto. Redford chose to show James her "Bachelor Survival Kit" upon introducing herself, while Milne went the ballsy route and "Lady and the Tramp"-ed him. You know:
The two women showed up wearing the same dress. The girls who organized those prom dress Facebook groups in high school are shuddering.
The dress, ID'd by Instagram account The Style Spotter as the Nookie Viva 2Way Gown from Revolve, was a floor-length, body-hugging halter style with convertible strap stylings -- meaning it could have been worn two different ways -- that comes in three different colors. Alas, both Redman and Milne chose to wear the straps criss-crossed, and both chose the red. Be bold, as they say!
Redman and Milne both acknowledged the faux pas on their Instagram stories during the premiere: 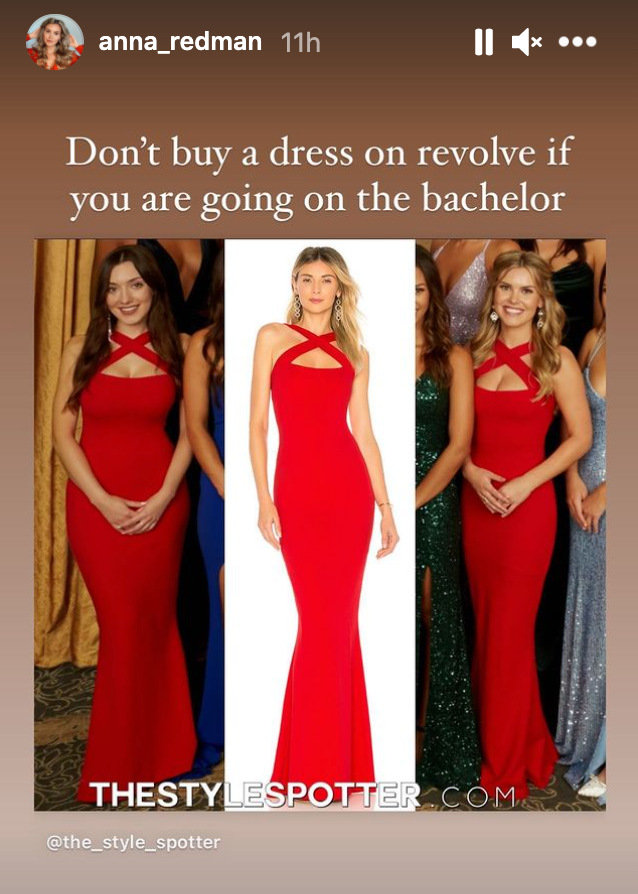 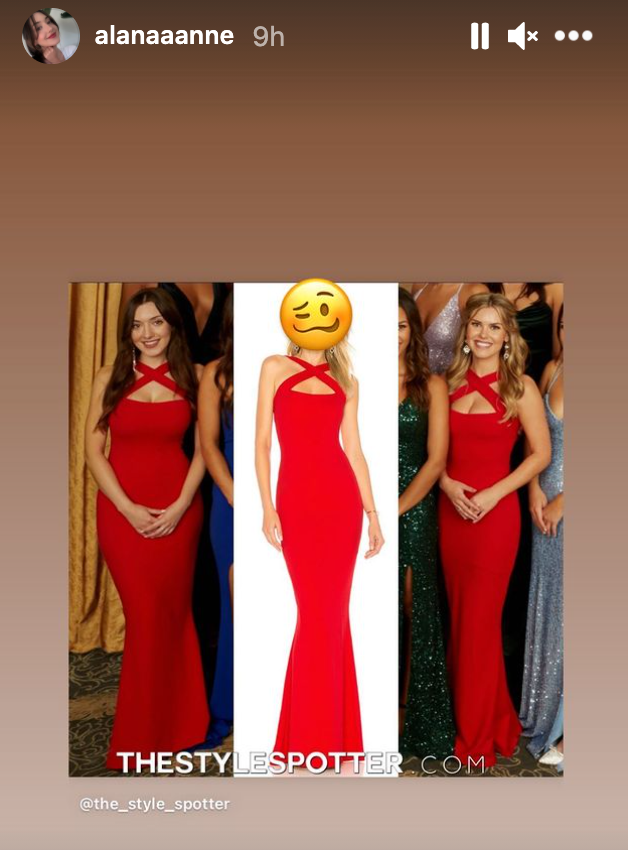 What made this little slip so heartbreaking was that it could have flown under the radar! As someone who watched the entire two-hour premiere live last night, I can say that I truly did not notice the dresses until they were made so blatantly obvious that you couldn't not notice. After seeing dozens of ballgowns within the same half-hour time frame, they tend to blur together, anyway, and it wasn't addressed during the episode (that I caught, anyway).
But those "Bachelor" producers do not rest.
During the rose ceremony, Redman and Milne were positioned right on top of one another. They didn't go so far as to stand them right next to each other, but if anything, this just made it easier to fit both women in the same camera frame. You know that these ladies don't get to choose where they stand, and you know the producers got a kick out of putting the identical dresses on full display.
They also did it prior to the first rose ceremony, when James and the women took the obligatory group photo. Redman and Milne both appear in the first row of women, whereas had one, or even both, of them been positioned in the back row, the eye would skip right over the dresses. 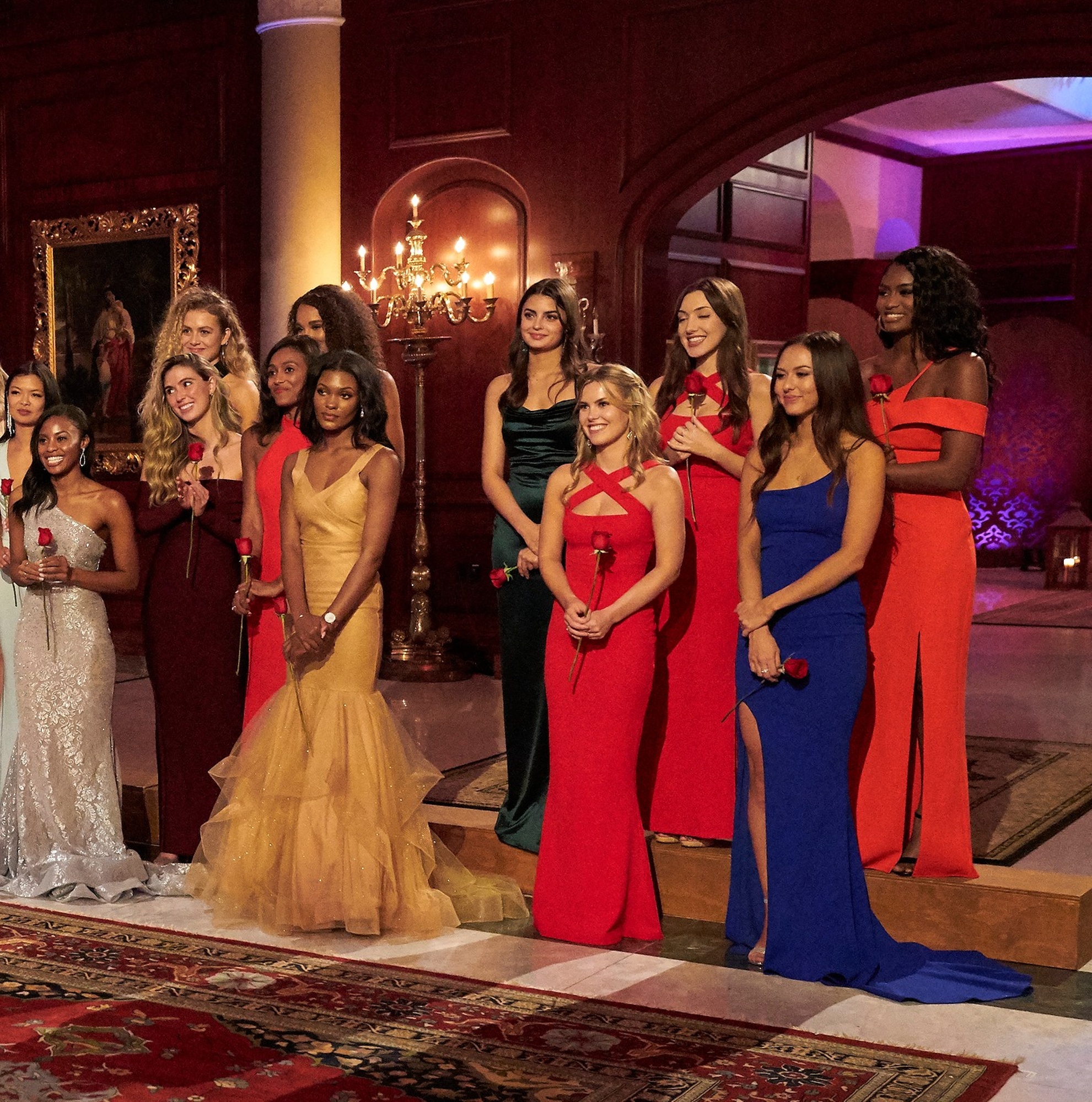 Not a single red dress in the front row besides that dress. Shameful (but also hilarious).
This did happen once before, on season 23, when Colton Underwood was the lead. Heather Martin (who, coincidentally, promos revealed will show up this season to vie for James' heart) and Lauren Pellerito both arrived to the Bachelor Mansion wearing a strapless red gown with a slit, which The Style Spotter also figured out was the LIKELY Windsor Strapless Gown.
But still -- tragic.

Did the producers do them wrong here?