Do you love drama? Us, too. If it seems like there’s a new scandal out there plaguing the stars every other day...that’s because there is. The best part? It’s not happening to us! Keep up with all the hot goss and everything celeb scandal right here.

by Brigitte Carreiro
Mar 6, 2020
“Lizzie McGuire” was a tween’s godsend. The Disney Channel show, focused on a middle-schooler going through the typical middle school trials and tribulations (handling an annoying little brother, convincing your mom to buy you a bra, impressing your crush in the shadow of your arch nemesis), was the height of every 12-year-old’s afternoon, and the full-length 2003 movie had everyone wishing they were Italian pop stars.
However, that generation of Lizzie lovers may never get what they deserve.

When the news dropped during last year’s D23 expo that “Lizzie McGuire” was getting brought back to life, there was a collective gasp heard around the millennial world. Hilary Duff, who played the titular Lizzie for two seasons (which somehow seemed like forever) in the early 2000s, shared the happy announcement with her Instagram followers that Disney+ would be at the helm, and everyone raced to start their subscriptions.
Production began back in November, and since then, small details trickled out of Disney, like how the show would be set in New York City and follow Lizzie’s life as a young professional; Lizzie’s family, originally played by Hallie Todd, Robert Carradine and Jake Thomas, would reprise their roles; and, to everyone’s absolute thrill, Adam Lamberg would return to play Lizzie’s BFF/momentary love interest, David “Gordo” Gordon.
“The good news is, just like me and everybody who loved Lizzie and has grown up with her, Lizzie’s also grown up,” Duff said to Entertainment Weekly. “She’s older, she’s wiser, she has a much bigger shoe budget, which is super exciting. She has her dream job. She has kind of the perfect life right now...and she’s getting ready to celebrate her 30th birthday.” 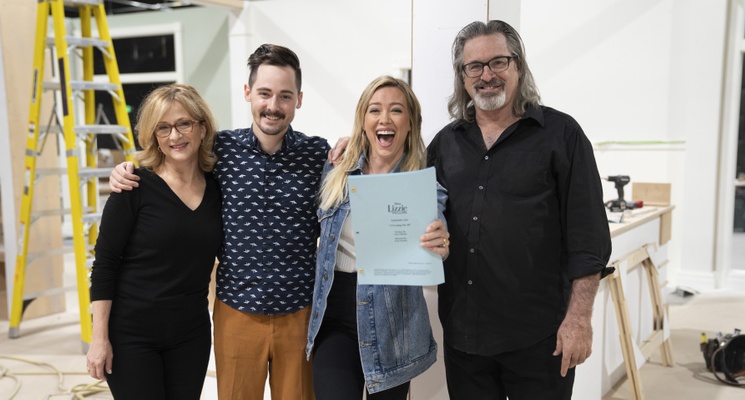 But are all good things destined to come to an end?

In January, original “Lizzie McGuire” creator Terri Minksy, who was back in charge for the reboot, left the show and production was halted while the team searched for a new showrunner.
Disney’s statement about Minsky’s departure was very official and proper: “Fans have a sentimental attachment to ‘Lizzie McGuire’ and high expectations for a new series,” Variety reported. “After filming two episodes, we concluded that we need to move in a different creative direction and are putting a new lens on the show.”
Duff, at the time of this news, was off on her African honeymoon with new musician husband Matthew Koma, with whom she shares 1-year-old Banks.
It all happened in a bit of a shroud of mystery, but from what we could glean, Minsky stepped down (or was potentially removed) from “Lizzie McGuire” over creative differences surrounding the subject matter of what was supposed to be a new, matured version of the fan favorite.
Minsky spoke out after the fact in an exclusive interview with Variety, explaining her side of things and setting some details straight. First of all, she was, in fact, fired.
“I am so proud of the two episodes we did. Hilary has a grasp of Lizzie McGuire at 30 that needs to be seen. It’s a wonderful thing to watch. I would love the show to exist, but ideally I would love it if it could be given that treatment of going to Hulu and doing the show that we were doing,” she said. “That’s the part where I am completely in the dark. It’s important to me that this show was important to people. I felt like I wanted to do a show that was worthy of that kind of devotion.”
Variety also reported that sources said Disney execs were on board with the type of, let’s say, sophisticated content that this new “Lizzie McGuire” was poised to explore, and that Duff and the rest of Minsky’s team were not made aware of her removal prior to the original Variety publication and statement by Disney.
After Minsky’s remarks, Duff herself spoke out and echoed the creator's sentiments, shining a bit more light on the situation.
The actress had previously responded to the news about Disney+ pulling their “Love, Simon”-inspired series, “Love, Victor,” after they determined that it wasn’t “family-friendly” enough. The show, following a gay high school boy navigating his love life and coming out in Atlanta, moved to Hulu, and Duff seemingly shaded the studio and alluded to the fact that her show was suffering the same fate.
Basically, Disney+ seems to be hell-bent on producing shows that adhere to strict definitions of what, exactly, is family-friendly. The idea is that they’ll find a showrunner that fits both the needs of Disney and the vision of the “Lizzie McGuire” team, but it looks like Duff is over it and ready to move on to Hulu.
[UPDDATE: 12/17/20]
I guess Hulu didn't work out.
Last night, Duff posted another note to her Instagram, explaining that even though she and her team tried really hard to come to some kind of consensus with Disney (who owns a majority stake in Hulu, remember), a matured Lizzie will not see the light of day.
Duff got a lot of support in her comments from friends like Sophie Turner and Sutton Foster, and her husband even wrote, "FREE LIZZIE."
Alas, it seems it wasn't meant to be.

While it would be lovely if “Lizzie McGuire” 2.0 could exist on its original network for nostalgia reasons, I want to see Lizzie all grown up and living life the way she actually would be as a 30-year-old.
The kids who grew up watching “Lizzie McGuire” on Disney Channel are just about exactly where a 30-year-old Lizzie would be now: bouncing around jobs, finding their place in the world, being bombarded with “adult life” and working out just what that looks like for them. I’m team Hilary on this one: If you’re not making a show that accurately represents the life of a young professional in New York City, then what’s the point?
Not to mention Disney isn’t gaining any fans with their super-strict content guidelines. The “Love, Simon” removal wasn’t painted in a very good light, and now they’re looking to restrict the storytelling of a grown woman’s experiences.
There’s no room left in the entertainment industry to tiptoe around expectations of an already-small and ever-shrinking demographic that doesn’t like to see adult women sleeping around or young boys breaking out of the closet. This “Lizzie McGuire” reboot is supposed to be geared toward millennials, so give the millennials what they want.
Disney has standards, sure, and upholding those standards is what makes it one of, if not the, most successful brands in the world, but is Lizzie McGuire’s sex life really going to be the straw that breaks the camel’s back?

They’re trying to push Disney’s back against the wall, citing hypocrisy, ignorance and being out of touch with their audience.
Not to mention the whole “middle-schooler hanging with an international pop star who probably wasn’t in middle school” thing.
And the Hulu idea was well-supported.
If you want to view some of the more ~explicit~ (but hilarious and true) responses, simply search “Lizzie McGuire” on Twitter.

Tip back the “Live and Let Lizzie”:

Is Disney being a prude, or is this the right call?