Mushu Probably Won’t Be in “Mulan,” and Here’s Why That’s a Good Thing

It wouldn’t be the same without Eddie Murphy, anyway.

by Brigitte Carreiro
Jul 8, 2019
Come one, come all, and feast your eyes upon the magnificent first teaser trailer for Disney’s remake of “Mulan.”
Liu Yifei (known as Crystal Liu in Hollywood) was chosen to play the titular soldier after a year-long search through over 1,000 actresses, and she looks downright lethal in this short clip.
While Liu wields a sword like a professional and somehow maintains a gorg blowout all the while, the battle sequences we see in this teaser don’t seem to be good enough for some. The callbacks to the 1998 animated film are there -- the matchmaker’s quarters, Mulan’s horse, the words “bring honor to us all” -- but there are some discrepancies. First, the music.
This may come as a shock, but we won’t hear favorite songs like “Reflection” and “I’ll Make a Man out of You” in this film, according to director Niki Caro from an interview with MovieFone.
“From what I understand, no songs right now, much to the horror of my children,” she said in 2017, and Dis Insider reportedly received more recent confirmation that there won’t be any singing in this version.
There are reports, however, that the songs will be included as instrumentals, and you can juuust make out the tune of “Reflection” in the trailer. But this is decidedly not a musical (don’t forget, both the “Cinderella” and “Dumbo” remakes were devoid of singing, too).
What’s more: Mushu the cast-off dragon is nowhere to be found.
And while Mushu is a no-show, Dis Insider is saying that a phoenix will take the little dragon’s place. You can’t, after all, have a Disney princess without an animal sidekick. And if Jasmine still had Raja in the recent “Aladdin” adaptation, Mulan better get a friend, too.
The outlet found more evidence to the phoenix theory when photos of the cast (specifically Doua Moua, who plays Po) wearing what appeared to be a set hoodie surfaced. The “Mulan” title art was emblazoned on the sweatshirt surrounded by the shape of a phoenix.
Some fans aren’t happy about the Mushu omission...
...to which I say: Have you all forgotten about Cri-Kee?!
Howwwever: Assuming that these complainers aren’t bigots, they may just be missing Disney’s point with this remake. I’ll spare you the history lesson, but “Mulan” was based on a Chinese narrative poem titled “Ballad of Mulan” that dates back to between 386 and 557 AD. Hua Mulan is a legendary figure from Chinese lore, and the poem tells of how she took her ailing father’s place in the army. To Disney’s credit, the original story does say that she fell in love while serving. 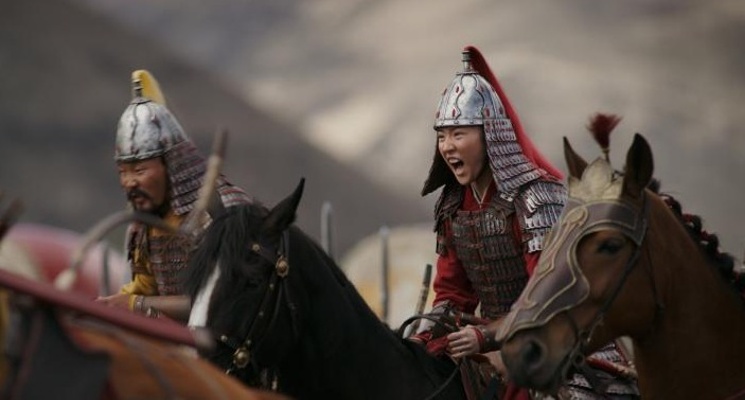 Some criticism had followed the 1998 animated film when it first debuted, because although the overarching theme was a woman saying “anything you can do I can do better,” there was an underlying appropriation of the Chinese culture -- the judgment being that Disney used it to go big at the box office.
Now, Disney has a chance to do it differently by focusing on the history and accuracy of the story. Instead of snarky dragons and a hunky army commander, new characters include a mentor to Mulan and young army recruit. While we can probably bet that there will be your fair amount of Disney-esque influences (epic cinematography, a love story, sentimental dialogue), it looks like they’re moving as far away from what made the animated version problematic as possible.
See how you feel yourself when “Mulan” hits theaters on March 27, 2020.

The "Aladdin" Remake Isn't Necessarily a Whole New World, but It's SO Worth Talking About