What the Heck Happened In "Avengers: Infinity War"? A Complete Review & Analysis of Marvel's Latest Film

by Hillary Bautch
Apr 27, 2018
It's no secret that I've been just a wee bit excited for the premiere of "Avengers: Infinity War." With 10 years and 18 movies leading up to this pivotal film, you can't blame me for already seeing it twice in the week since it was released. Apparently I'm not the only one who went a little theater crazy over the weekend, considering "Infinity War" shattered the box office record for the biggest global opening ever, bringing in $640.9 million worldwide. Not only that, but it brought in $258.2 million domestically, beating "Star Wars: The Force Awakens" after its record-breaking debut in 2015.
OK, so I don't really need to tell you that this is a great film. It is a FANTASTIC movie that people will enjoy no matter if they're a Marvel fan or not. Bringing together more than 20 Marvel Cinematic Universe (MCU) heroes, its "Game of Thrones"-esque storyline connection could not have been executed better. It was filled with almost nonstop action, and I was emotionally exhausted by the end (both times I saw it), but that speechless feeling it left me with is part of why I loved it so much.
Now, I would like to take a bit of a deep dive into some of the major questions fans were left with after the film. I don't have all the answers, obviously, but other than Stan Lee, who does?
SPOILERS AHEAD, OBVIOUSLY.

Well, the answer to that question depends on who you're talking to and in what context. Unfortunately (but also fortunately?) for us, we can never be 100 percent certain that anyone in the MCU is dead. There are way too many loopholes and if Loki is any example, people can appear to die time and time again and then show up out of nowhere like nothing ever happened.
That said, we are fairly certain that at this point Loki (Tom Hiddleston), Heimdall (Idris Elba), Gamora (Zoe Saldana) and Vision (Paul Bettany) are dead. They were all murdered by the hand of Thanos (or his minions) and unless a miracle happens, they're gone.
Here's where things get a bit fuzzy. At the end of "Infinity War," we watch approximately 50 percent of the cast (as well as the entire universe, because "balance") vaporize into nothing. Are they really dead? Well, we don't know that. The film would lead us to believe that when the Infinity Gauntlet was filled and Thanos snapped his big purple fingers, Scarlet Witch, Bucky Barnes, Falcon, Black Panther, Star-Lord, Doctor Strange, Groot, Mantis, Drax, Spider-Man (break my heart, will ya?), Nick Fury and Maria Hill are all gone. 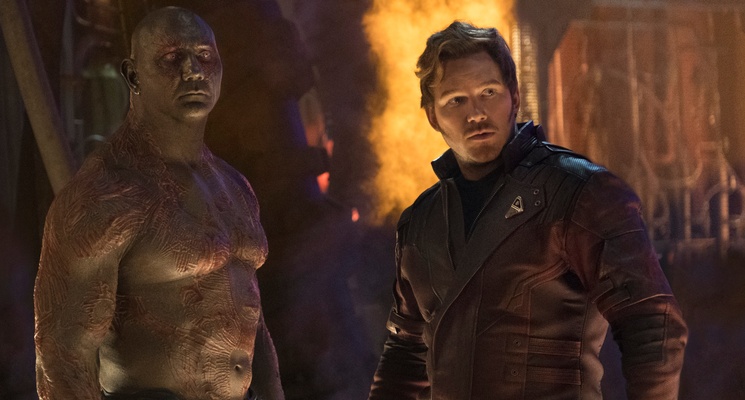 Now, we already know that Spider-Man, Black Panther and the Guardians all have more movies in the works, which would be pretty hard to release if all of those characters are presumed dead. Filmmakers love a good prequel, but three prequels? There's no way.

If I was a betting woman, I'd wager that all of our heroes aren't actually dead, but have simply disappeared for awhile. Maybe they're on another planet, maybe they're in another dimension -- either way, they'll be back. We don't know for sure if Ant-Man was vaporized or not, but we do know that he has the ability to cross dimensions, known in the MCU as the Quantum Realm. In the Quantum Realm, both space and time are irrelevant. So if the rest of our heroes are trapped in another dimension following their tussle with Thanos, he may be able to reach them or even open some sort of portal between the dimensions to get them back.

Which brings me to my next question...

What's up with Captain Marvel and that cut scene?

In the scene following the credits at the end of "Infinity war," we see S.H.I.E.L.D. agents Nick Fury and Maria Hill get vaporized along with everyone else. Before he disappears, though, Fury pulls a device out of his bag and calls someone. We find out that he paged Captain Marvel, one of the many heroes from the Marvel Universe that we have yet to meet. Why did he call her? Well, because she may be the only person who could evade Thanos' scheme.

We know that when Brie Larson finally takes the screen in her role as Carol Danvers, aka Captain Marvel, her powers are going to be far beyond that of any other character we've encountered thus far in the MCU. Captain Marvel is part Kree (a scientifically and technologically advanced alien race), and is basically Superman on steroids. In the comics, her powers include superhuman strength, speed, agility, insane reflexes, flight, precognition (she can see a bit into the future), energy manipulation and healing. TL;DR -- she's pretty effing powerful. 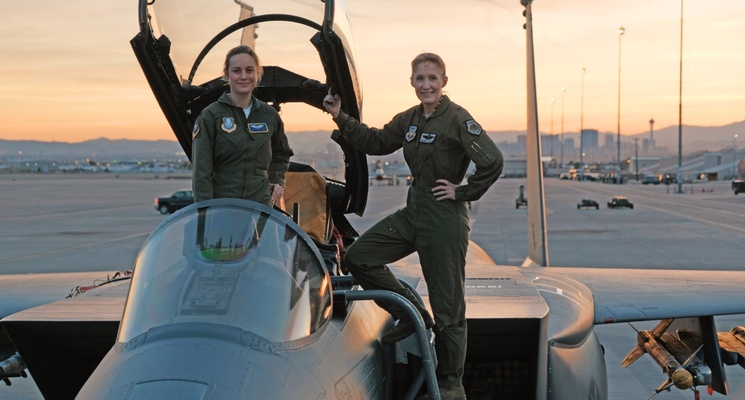 Similar to Ant-Man, Captain Marvel has the ability to access the Quantum Realm. Unfortunately, she can't technically time travel (because that would make everything way too easy), but when combining all of her other powers, she can exist in space without any technological assistance.

A solo Captain Marvel film is currently slated for March 2019 and will be set in the 1990s to dig deeper into the origin of her power. She will also appear in "Avengers 4," which comes out just two months later. If I had to guess, I'd say "Avengers 4" will pick up right where "Infinity War" left off, and we'll see Miss Danvers answer Fury's call -- hopefully with Ant-Man in tow.

Why did Dr. Strange give Thanos the Time Stone?

While you were watching "Infinity War," something along the lines of "WTFFF" probably went through your mind when Dr. Stephen Strange just handed the Time Stone over to Thanos while they were on Titan. Didn't he say that his one sole purpose in life was to protect the stone? Didn't he flat out tell Tony that if he had to choose between saving him, Peter or the Time Stone, he'd choose the stone every time and twice on Sundays? Yes...but it's not that simple.
Before Dr. Strange evaporated, he told Tony that there was no other way than to give Thanos the stone. No other way to do what? Well, you may remember that earlier in the film, Strange did some weird wizard voodoo and looked into the future to see all possible outcomes of their battle with Thanos. Unfortunately for the Avengers, he saw over 14 million different outcomes and only one of them ended with them defeating the Mad Titan. Not good odds, if you ask me.

A couple different things could have happened here that influenced his decision to give up the stone. In the winning outcome, he may have seen Tony alive and playing a crucial role in the eventual victory over Thanos. If that's the case, he knew that Tony needed to stay alive, not die on Titan with a stake through his heart. It's also possible that he saw Captain Marvel in the future, and he knew that sh*t would really have to hit the fan for Nick Fury to call her back from whatever dimension she's been living in. Maybe it's just me, but I'm fairly certain that Thanos filling the Infinity Gauntlet and eliminating half the universe is the definition of sh*t hitting the fan.

What happened to the Infinity Gauntlet?

After Thanos does his eliminate-half-the-universe trick at the end of the film, we see the Infinity Gauntlet looking charred, mangled and definitely NOT usable by anyone else to undo the destruction he caused. What happens to it now, and where did the Infinity Stones go?
We know that while Thor, Rocket and Groot were on Nidavellier, the dwarf Eitri was still in possession of the mold used to make the original Infinity Gauntlet. So in theory, the blacksmith may be able to make another gauntlet that the Avengers could use to reverse the devastation that Thanos caused. One issue with this is that if they wanted to fill the Gauntlet again and use it against the Mad Titan, they'd need all the Infinity Stones. 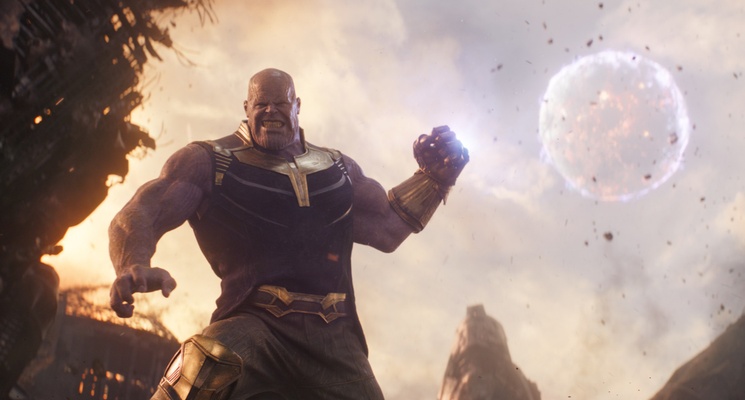 As far as we know, Thanos may still have the stones. Also, just because the Gauntlet looked a little wonky when he went off on his power trip doesn't mean that Thanos doesn't still have it and/or the power to use it. In the comics, after half of the population is obliterated, it's actually Nebula who steals the Gauntlet from Thanos and uses it against him before restoring the entire universe to be the way it was 24 hours before -- thus bringing all of the Avengers back to life. The chances of the Russo Brothers following this storyline in "Avengers 4" are slim, but at this point anything is possible.

One of the strangest parts of "Infinity War" was that no matter how hard he tried, Bruce Banner just couldn't get the Hulk to come out and play. The Hulk inside Banner acts a bit like a child throwing a temper tantrum, quite literally yelling "NO" when Banner tries to force him out. What gives?
The short answer? He's scared. Hulk has never been defeated in the MCU, yet the first scene of "Infinity War" shows Hulk getting the crap beat out of him by Thanos while aboard the Asgardian refugee ship. Thankfully, Heimdall uses his last ounce of power to transport Hulk back to Earth, but Banner spends the rest of the film trying to convince Hulk to come out, eventually joining the fight against the Black Order in a super-sized Iron Man suit.
This adds an interesting dimension to Banner's character, and flips everything we thought we knew about Hulk on its head. In previous films, Banner has struggled to keep Hulk at bay and lives in constant fear that he'll turn into The Other Guy and wreak havoc on his surroundings the minute he gets a bit angry. In the original "Avengers," he even tells Captain America that he's "always angry," and becoming the Hulk is as simple as finally giving into the anger inside him.
Now, while it seems both Banner and Hulk have matured a bit, Hulk may have even more control over Banner than the other way around. This internal power dynamic was actually foreshadowed in "Thor: Ragnarok" when Banner attempted to jump in front of Fenris Wolf, but instead fell flat on his face on the Bifrost. Banner is slowly learning that he can't bring the Hulk out whenever he wants, and it's going to take a lot more than just "losing control and turning into an enormous green rage monster."

I think this character arc will come to some sort of a close in "Avengers 4," and we'll finally find out if these two guys can coexist without one of them leaving the other high and dry in the middle of the battlefield.

Can You Identify Each of These "Avengers: Infinity War" Stars By Mouth?

People Are Losing Their Sh*t Over the LA "Avengers: Infinity War" Premiere (and the Cast Looked Pretty Good Too)