What If "Friends" Was Rebooted Like "The Golden Girls"? Jennifer Aniston Thinks It's Possible

by Hillary Bautch
Aug 1, 2018
With all due respect, I’m not heartbroken.
So said the glorious, breathtaking, timeless Jennifer Aniston when she recently sat down with InStyle to discuss her life, love and those pesky rumors that are constantly swirling around her (no, for the last time, she isn't pregnant). The 49-year-old's newest film "Dumplin'" will be released later this year, in which she plays an ex-pageant queen with a daughter who tries to revolutionize the pageant world in their small Texas town. She's currently filming "Murder Mystery," an action comedy with Adam Sandler, and we are still anxiously awaiting more details on her upcoming TV series with Reese Witherspoon.
TL;DR -- homegirl has her hands full.
Because Aniston will also forever be known as Rachel Green, InStyle's interview would not be complete without a question about the potential of a "Friends" reboot. How many times has she been asked that question, I wonder?
"Courteney [Cox] and Lisa [Kudrow] and I talk about it," she said. "I fantasize about it. It really was the greatest job I ever had. I don’t know what it would look like today, but you never know."
A very diplomatic answer, sure. But what she said next is what really got me.
"We [could] just give it some time and then Lisa, Courteney and I could reboot 'The Golden Girls' and spend our last years together on wicker furniture."
Why has no one else ever thought of this?! Just imagine a land far, far away -- or, you know, in a retirement home in Hoboken -- where Rachel, Monica and Phoebe are living their best lives and causing just as much trouble as they did in the '90s. They wouldn't even need to change their wardrobes because by that time '90s fashion will be out and back again. Presenting: "The Golden Friends."

Although she does eventually end up with Ross, Rachel always had some issues dating. Who could forget Paulo, the sexy-but-pervy Italian stallion whom she slept with dated on and off after her split from Barry? Or Josh, the college student who regularly stole money from her? You have a knack for choosing some real winners, Rach.
What if Ross and Rachel didn't actually end up together, or went on yet another "break" that didn't have a happy ending? In the "The Golden Friends," Rachel would revisit her frisky streak a la Blache Devereaux, dating up a storm and bringing home some much younger men (you know, like 55) that she meets during bingo on Sunday afternoons. Let's just hope that by this time, we won't have another Russ situation on our hands. 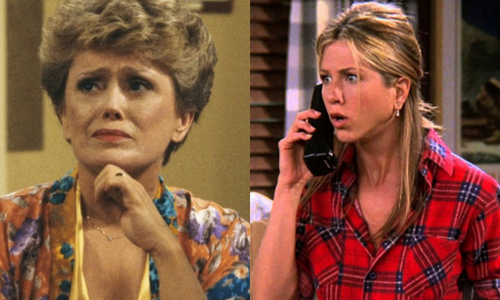 First of all, I love Monica and Chandler together. That said, no one is perfect and sometimes Chandler is kind of clueless. Do they split down the road? Maybe. If you hadn't noticed, Monica is a bit Type A and if someone told me that she finally lost her patience for his shenanigans (and failure to properly organize her bath towels into all 11 categories), I wouldn't be surprised.
Fast forward to "The Golden Friends," where Monica would channel Dorothy Zbornak as the glue that holds the rest of the girls together. She has many mishaps in the dating pool as well and even secretly visits Richard in the old folks home every now and then. In the end, she and Chandler find their way back to each other because love is love and let's be honest, he'd be lost without her. 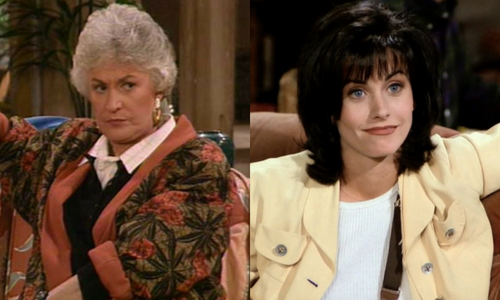 Phoebe is hilarious and has the biggest heart, but there's no denying that she is a bit of a space cadet most of the time. So it should come as no surprise that she would walk in Rose Nylund's footsteps in "The Golden Friends."
When the ladies are old and gray, Phoebe will still be talking about the good old days when she was growing up on the street and playing with a barrel. The rest of the friends will have accepted that Phoebe's mom really did come back to Earth as a cat, as did the rest of her family, resulting in at least seven felines running around (much to Monica's dismay). Oh, and she's convinced that one of them is the real Smelly Cat who has finally revealed himself to her after all these years. 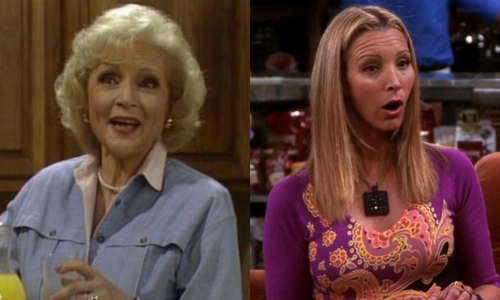 Would you watch a "Golden Girls"-esque reboot of "Friends"? Tell us below!