by Brigitte Carreiro
Dec 21, 2019
Ellen Degeneres. Laverne Cox. Jonathan Van freakin’ Ness: All iconic figures in the LGBTQ space of the entertainment industry Whether they’ve shared their personal histories with the world for a good cause or forged new paths for the community as a whole, these people are prominent players in the realm of LGBTQ activism. Who could forget Ellen’s “Yep, I’m Gay” TIME cover? Cox was the first openly transgender person to be nominated for an acting Primetime Emmy Award. And JVN just became the first openly non-binary Cosmo UK cover star, after telling the world he was HIV positive.
Big moments like this that spark change, of course, but it’s also the subtleties that we don’t talk about as often that are crucial to making things happen -- and that goes for any movement. The LGBTQ community has seen such progression in the past decade, with more and more stars living their truth -- gay, queer, non-binary, whatever it may be -- with no apologies. People like Halsey, Alyson Stoner, Cara Delevigne and Sam Smith are forging a new path for the next LGBTQ generation, not by making huge, grand gestures or over-explaining themselves, but by simply being what they are, no questions asked.
And I have to give a special shoutout to Dan Levy, who hesitated to label his sexuality for a while until officially coming out as gay in 2017. Levy’s pride and joy, the TV show “Schitt’s Creek,” is coming to an end after its sixth season (premiering Jan. 7 on Pop TV), but what an impressive run it’s been. The show is often lauded for its ability, as a comedy, no less, to take an understated yet strong stance on LGBTQ awareness, and it’s one that will go down in history as an example of inclusion, love and acceptance.
But right now, I want to talk about Harry Styles. Yes, former boy-bander Harry Styles.
After having an incredible year (the Met Gala, a Rolling Stone cover, the release of his second album), Styles’ intrigue has grown in tandem with his increasing level of self-expression. Take his Met Gala, look, for instance: 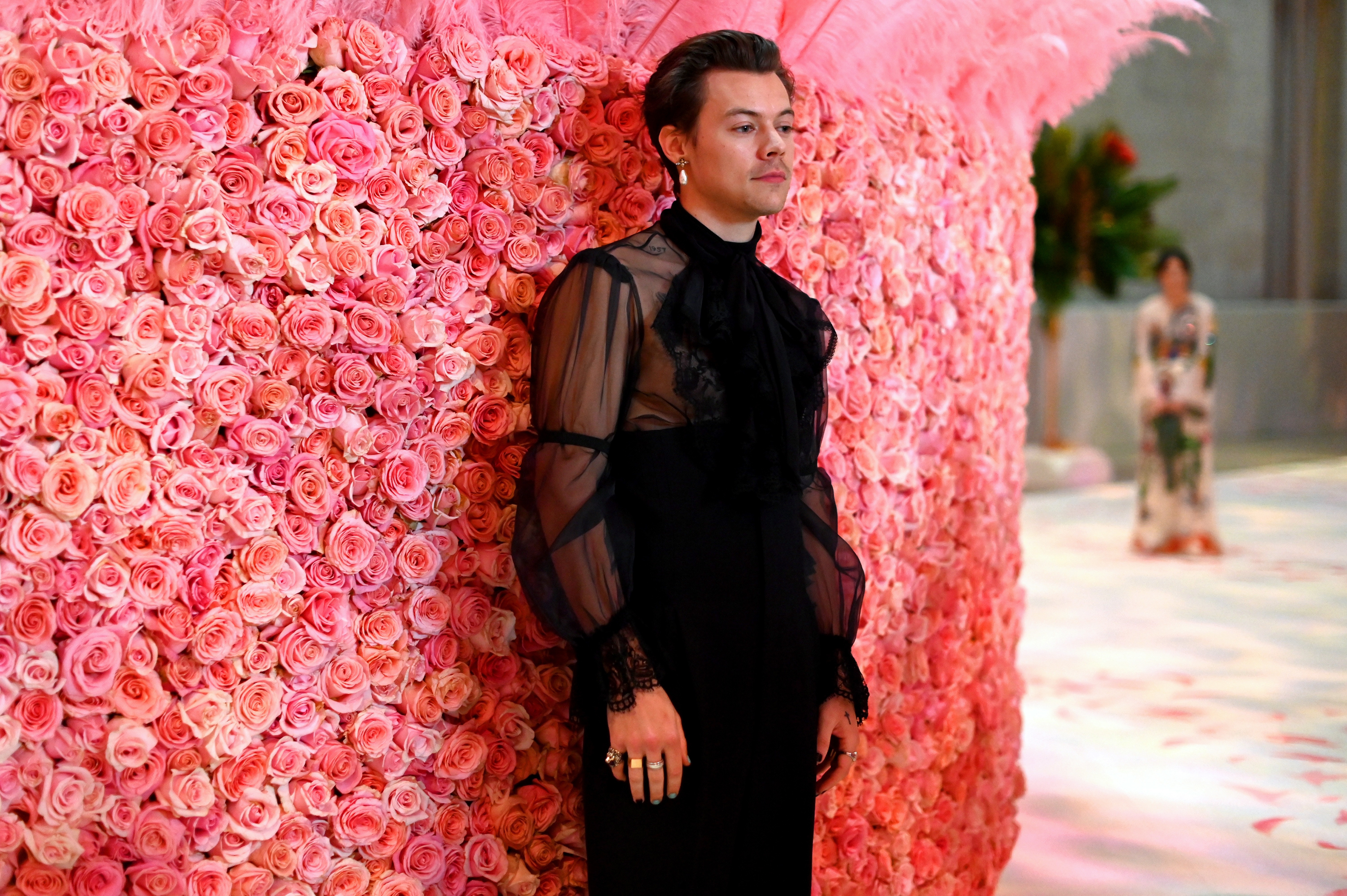 A sheer top that can only be described as a blouse, a single dangly pearl earring, nail polish. Styles’ has his own, well, style, unencumbered by gender norms or sexuality labels. And Styles isn’t interested in ever labeling it. When Tom Lamont from The Guardian asked him if anyone’s ever asked him about his sexuality, Styles wondered why, exactly, it mattered.
“It’s not like I’m sitting on an answer, and protecting it, and holding it back. It’s not a case of: I’m not telling you ‘cause I don’t want to tell you. It’s not: Ooh, this is mine and it’s not yours,” he said. “It’s: Who cares? Does that make sense? It’s just: Who cares?”
Styles’ fashion choices have fluctuated from overtly masculine to not-so-coyly feminine, but you can’t deny that his taste has ever wavered from perfection.
And if you take a look at his most recent album cover, Lamont wrote, you could easily assume that Styles played with the color scheme of the transgender pride flag, but Styles made it clear that he isn’t concerned with whether it comes off as a hint or some kind of purposeful statement.
“Am I sprinkling in nuggets of sexual ambiguity to try and be more interesting? No. In terms of how I wanna dress, and what the album sleeve’s gonna be, I tend to make decisions in terms of collaborators I want to work with. I want things to look a certain way,” he said. “Not because it makes me look gay, or it makes me look straight, or it makes me look bisexual, but because I think it looks cool. And more than that, I dunno, I just think sexuality’s something that’s fun. Honestly? I can’t say I’ve given it any more thought than that.”
The way a 25-year-old former boy band member and burgeoning rockstar can tell the world, “This is none of your beeswax and literally doesn’t matter” may seem like an inconsequential step toward a brighter future for the LGBTQ community, but let’s use the “Schitt’s Creek” example again: Rather than acknowledging queer expression, gender fluidity and same-sex relationships as an “other,” in these cases, it just is.
“What women wear. What men wear. For me it’s not a question of that. If I see a nice shirt and get told, ‘But it’s for ladies.’ I think: ‘Okaaaay? Doesn’t make me want to wear it less though.’ I think the moment you feel more comfortable with yourself, it all becomes a lot easier.”
Styles told Lamont that he respects the sexuality questions -- mostly because he knows it comes with the territory -- but also hopes that those asking respect not getting an answer.
“I think it’s a very free, and freeing, time. I think people are asking, ‘Why not?’ a lot more. Which excites me. It’s not just clothes where lines have been blurred, it’s going across so many things. I think you can relate it to music and how genres are blurring,” he said, agreeing that sexuality can be lumped in that “blurring” category as well. “A part of it was having, like, a big moment of self-reflection. And self-acceptance.”
The LGBTQ fight is far from over, but the type of normalization that Styles is going for is a huge step in a positive direction.

Do you prefer One Direction Harry or solo Harry?