Goat Yoga Can't Happen in NYC, Which is a Damn Shame

by Kelly Lynch
Apr 21, 2018
If you live in New York and want to try out "goat yoga," the fitness craze everyone else in America is talking about, well, too bad.
Upstate New York studio NY Goat Yoga scheduled pop-up classes in the Brooklyn neighborhood of Bushwick this weekend. However, the health department had to rain on everyone's goat parade and deny permits.
“The Health Department worked closely with the NY Goat Yoga, but because we prohibit direct contact with certain animals we were unable to process their application and issue a permit,” a department spokesperson told the New York Post via email.
Goats are not allowed to stay in any building in the city, according to regulations. And while they could hang around for a brief demonstration, goats and humans would not be able to interact due to health code violations, which defeats the purpose the goat yoga.
Goat yoga became popular last year when a yogi told Oregon farmer Lainey Morse that her property would make the perfect setting for yoga classes.
"I said 'okay, but the goats have to join in,'" Morse told CNN. 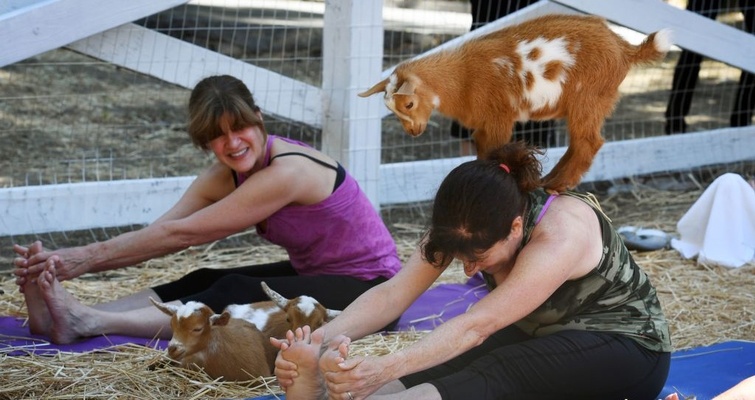 And so, goat yoga was born, along with a waiting list of over 1,000 people.
Participants welcome distractions such as a goat coming up to kiss them or snoozing on their backs while they're in child's pose.
"It may sound silly, but goat yoga is really helping people," Morse said about the practice. "People come in that have anxiety, depression; they're recovering from cancer or illness. It's not curing diseases, but it's helping people cope with whatever they're going through."

Have you ever tried goat yoga?